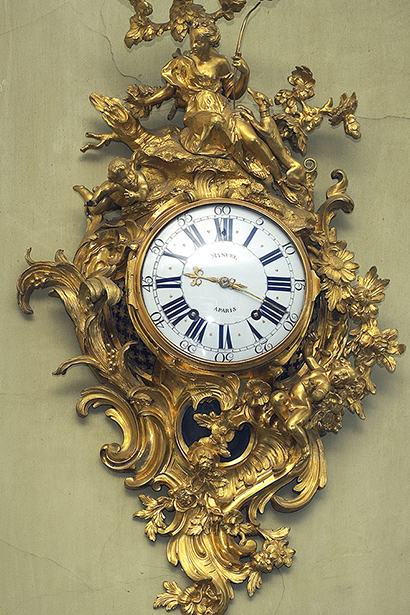 This wall clock is said to have been a gift from King Adolf Fredrik and Queen Lovisa Ulrika as godparents to the seal engraver Moses Marcus Levi when he converted and was baptised in December 1754. The fact that the king and queen were godparents and presented such an obviously expensive gift shows the importance of the event. The state faith of Sweden was Lutheranism, and when people converted from another faith this was ascribed great significance. Levi took the name Adolph Ludvig in honour of the king and queen, and Swedified his surname to Levin.

The clock face bears the signature of the French Court Clockmaker Louis Mynuel. A stamp shows that it dates from 1745-47, when Mynuel's widow had taken over the workshop. The figures on the crest depict Diana, the goddess of hunting, and one of her dogs. The bronze was produced by Jean-Joseph de Saint-Germain.

The clock was reacquired for the Royal Collections by the then Crown Prince Gustaf (V) in 1887.

The Royal Palace of Stockholm
The Guards' Hall, the Bernadotte Apartments