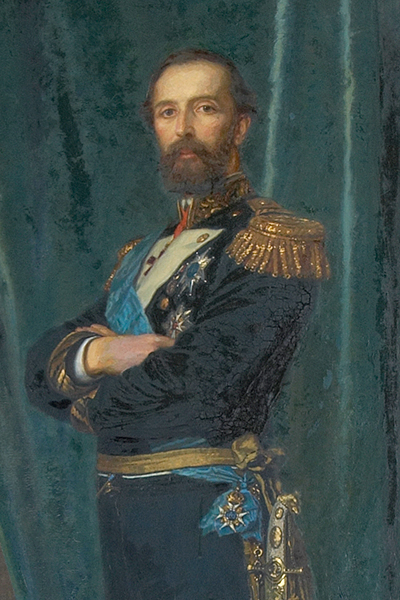 King Oskar II in a classic princely pose, dressed in his admiral's uniform. He looks at us with an authoritative look and his arms crossed. In the upper right corner, we can glimpse a picture depicting the Swedish Navy, with the wording "Ur svenska flottans minnen" ("From the Swedish Navy's Memories").

On his desk stands a bronzed writing stand, which also stands on the desk of our current King Carl XVI Gustaf when he receives visits in the Bernadotte Apartments.

The portrait was a gift from King Oskar II to his consort, Queen Sofia. The king's face has been retouched on a number of occasions, most recently in 1918.

The portrait can be seen in the Bernadotte Gallery at the Royal Palace of Stockholm.