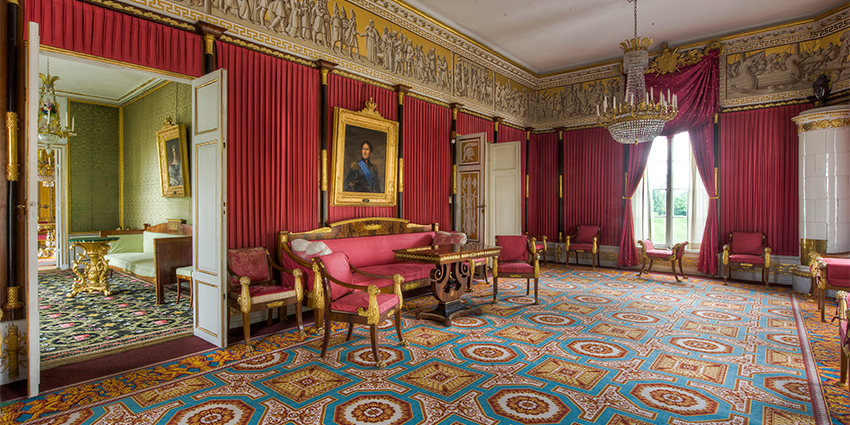 A history of style – Empire

The strong contrasts and colour palette of the Empire style, its military symbolism and its expensive materials reflect European tastes during the Napoleonic Wars. The Swedish version of the French Empire style is named after the first monarch of the Bernadotte Dynasty – King Karl Johan – whose summer palace at Rosendal contains some of Sweden's best preserved examples of interiors from the period.

Classicism found new dimensions and expressions in Napoleonic Europe. In Sweden, a new regime was ushered in following the loss of Finland in 1809, with a new era and a new royal dynasty. The fashions, interiors and politics of the Gustavian era were consigned to the history books. A new era brought new ideals – those of the French Empire style. In Sweden, this is known as the Karl Johan style, named after the first monarch of the Bernadotte Dynasty, whose arrival in Sweden coincided with the emergence of the new style.

Rosendal Palace on Djurgården was built by King Karl XIV Johan for daytrips and entertaining, close to where military exercises were carried out at Ladugårdsgärde. The palace includes the Red Salon, decorated like a Roman military tent, with its clear symbolism. The courageous warrior and king for whom the room was created is referenced in several of the interior's details, in the form of both ancient Nordic and classical tales of heroism.

The fabric-draped walls and generous curtains of the Red Salon are ornamented with expressive symbols of war, including classical weaponry, shields, spears and lances, combined with more modern canons. For example, the Swedish and Norwegian National Coats of Arms decorate the top of the sofa back. The burnished bronze mountings contrast dramatically with the dark mahogany of the sofa and the furniture retains its original silk, patterned with palmettes that are typical of the time. The pelta shield can be seen on the upholstered back rests of the chairs.

Craftsmanship of the highest quality

It was the pupils of the great Gustavian masters who led developments within Swedish furniture-making, retaining the high quality levels of craftsmanship and materials of the Gustavian era, while incorporating the modern style of the Napoleonic period: the Empire style.

Many pieces of Empire style furniture were made by Lorenz Wilhelm Lundelius, who became a master furniture builder in 1818 and the last master of the carpenters' guild before its dissolution in 1846. He had learnt his trade from his father, Anders Lundelius, whose austere, elegant Gustavian furniture can also be found in the Royal Collections. Today, L.W. Lundelius' masterpieces can be seen in the Bernadotte Gallery at the Royal Palace.

The best preserved Swedish interiors from this time are at King Karl XIV Johan's summer palace, Rosendal Palace on Royal Djurgården in Stockholm. However, the Royal Palace also features many excellent examples of décor and furniture from the period.

A new way of furnishing

The 18th century custom was to keep furniture along the wall, bringing a tea table or gaming table, for example, to the centre of the room when required. It was only some way into the 19th century that the arrangements we are used to today, with groups of furniture permanently positioned in rooms, gradually came into common practice.

Karl Johan style tables are more compact and a different weight compared to the elegant, narrow-legged Gustavian tables they succeeded. Pillar tables became extremely popular, frequently with drop leaves, and occupied a permanent central position, often in front of the long, straight mahogany sofa. Chairs that were easier to move could be positioned around the room as needed.

The large Guest Apartments at the Royal Palace have fine pillar tables from the time of King Karl Johan, as well as smaller, more moveable tables from the same period. Lorenz Wilhelm Lundelius made many smaller mahogany pillar tables with gilded pillar feet in the shape of a fasces (a bundle of rods) decorated with banners and classical weaponry. The mahogany foot end is in the shape of a tripod, another form from antiquity that was popular during the Empire period. The whole piece stands on three gilded lion's paws. It is elegant, characteristic of the period and effective. 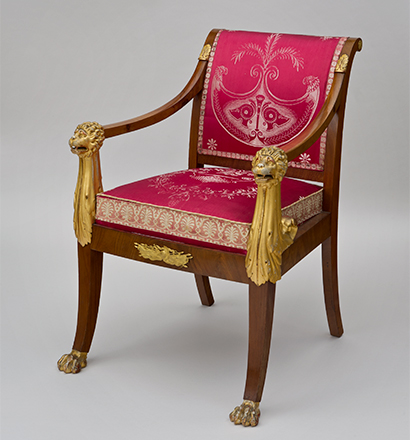 The Red Salon at Rosendal Palace (top image) is decorated in the style of a Roman military tent. The military symbolism of the Empire style is clearly evident in the décor, such as the repeated pelta shield on the upholstered back rests of the chairs. Photo: Alexis Daflos 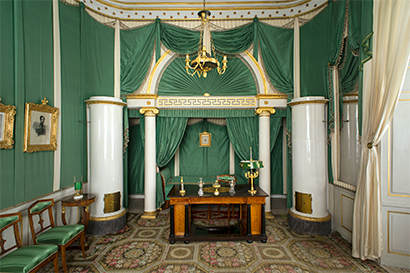 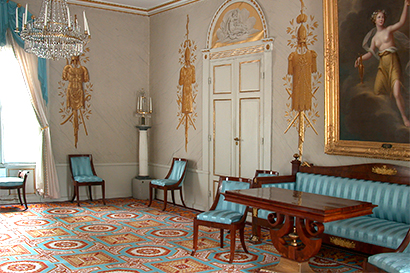 Pillar tables were popular during the Empire period, and were more compact than their earlier Gustavian counterparts. They came to occupy central, permanent positions in the room, marking a new way of furnishing. The image shows the Blue Salon at Rosendal Palace. Photo: Alexis Daflos 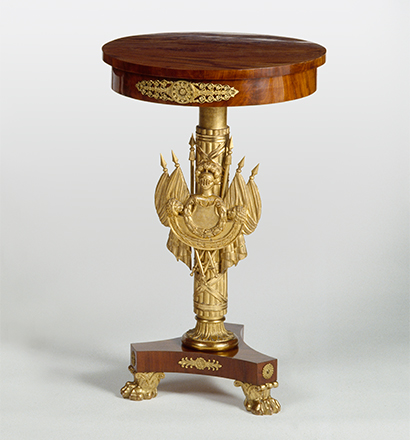 The master furniture builder Lorenz Wilhelm Lundelius made several small mahogany pillar tables. The gilded pillar is in the form of a fasces (a bundle of rods), with banners and classical weaponry. The table foot is a tripod, a form from antiquity that was popular during the Empire period. Photo: Alexis Daflos

EMPIRE STYLE AT THE ROYAL PALACES

Watch a video about seasonal maintenance at Rosendal Palace (in Swedish)

TYPICAL FEATURES OF THE EMPIRE STYLE

Strong contrasts and expressive symbolic content typify the French Empire style. The wars of the era are clearly reflected here, and can be seen in the style of contemporary furnishings and ornaments, and in the clear, strong colour palette. Opulent silk and lacework drapery dominates the curtains and interiors, and richly patterned rugs cover the entire floor. Dark mahogany furniture contrasts dramatically with decorative burnished bronze fittings. Ornamental objects in expensive types of stone such as porphyry and Russian malachite are typical of the Empire style, as are table clocks and candelabras in burnished bronze. Motifs from antiquity can be seen in pelta-shaped chair backs and klismos legs.