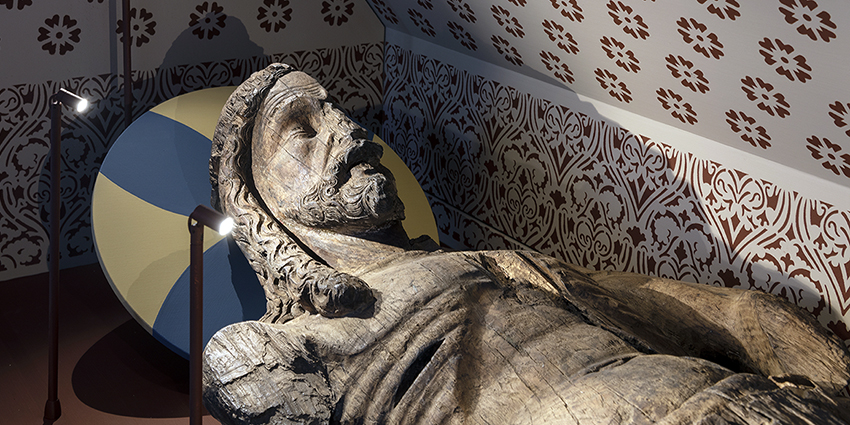 The grave of Christ

The Riddarholmen Church's newest addition is also one of the church's oldest objects: a wooden sculpture of Christ, dating from around the year 1400. During the Middle Ages, it was used in the Passion Play at Easter.

The ancient wooden sculpture of Christ came to the Riddarholmen Church during the Middle Ages. It was removed in the 18th century, experienced various adventures, and returned to the church in the early 19th century. At that time there was no space for it, so it was placed in the attic and more or less forgotten about.

Now, this solid oak sculpture – which is 187 cm tall and more than 600 years old – has been restored, placed in a new chest, and returned to its original place in the north nave of the church.

The grave of Christ in the Passion Play

The grave of Christ was mainly used in the mediaeval Passion Play, which told stories from the Bible – usually about events relating to Easter. The sculpture was wrapped up and laid in a chest. The lid was then closed. Two guards stood beside it, just like in the Bible, and in the morning – before the congregation came to the church – the sculpture was removed. So when the grave was opened, it was empty.

The Passion Play was forbidden as part of the Reformation, and most such sculptures of Christ disappeared in Sweden. Today, only four remain and the sculpture in the Riddarholmen Church is the oldest, dating from around the turn of the 15th century. It was first mentioned in 1505, when the city official Ingevald Thorstensson donated funds to the abbey. In return, a Sunday Mass was to be held in the abbey's Chapel of St Erasmus.

The chapel was in the northwest section of the north nave, where the grave of Christ has once again been placed.

The grave of Christ is removed

The sculpture was still in the church at the beginning of the 18th century, but was moved to the arsenal – the Makalös Palace – in Stockholm's Kungsträdgården. In 1803 it was in the Royal Armoury, and by September 1804 the sculpture had returned to the Riddarholmen Church. At that time there was no space for it, so it was placed in the attic and more or less forgotten about.

Over the years, the statue has lost its feet, its arms and half of its head. It has also faded and become increasingly grimy. Soot and tar deposits suggest that it was exposed to the church fire of 1835.

The sculpture has now undergone careful restoration, and is housed in a new chest based on the design of a similar grave of Christ at the Swedish History Museum. The sculpture will now be on permanent display at the Riddarholmen Church, in its original position in the north nave.

Top image: The new cruciform halo which surrounds the sculpture's head is modelled on the grave of Christ at Kerteminde in Denmark. Photo: Sanna Argus Tirén/Royalpalaces.se 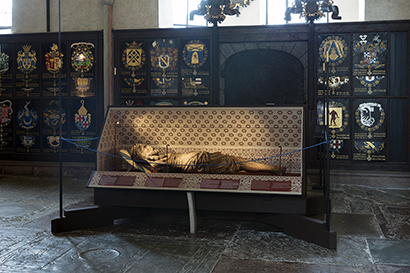 Only the sculpture now remains from the grave of Christ. It once also included a chest, but we do not know what it looked like. The new chest is modelled on a similar grave of Christ at the Swedish History Museum. Photo: Sanna Argus Tirén/Royalpalaces.se 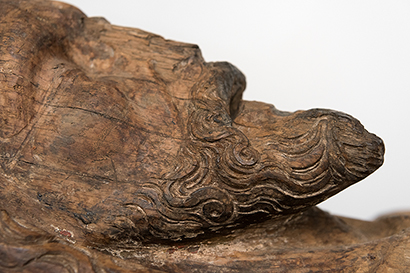 The delicate facial features include wrinkles on the forehead and fine lines around the closed eyes. The head has wavy hair, a forked beard and the remains of a crown of thorns. Photo: Sanna Argus Tirén/Royalpalaces.se 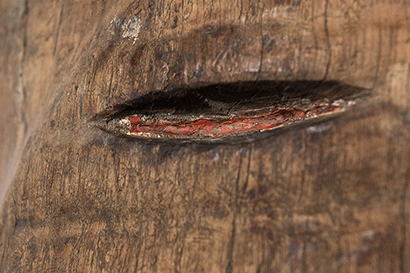 The oak sculpture was originally painted in naturalistic colours that were much brighter than their current appearance. The skin was pale, with blood-red scourge scars. The red colour can also be seen in the wound on the side of the sculpture. Photo: Sanna Argus Tirén/Royalpalaces.se 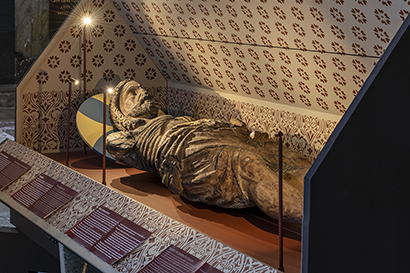 The sculpture will now be on permanent display at the Riddarholmen Church, in its original position in the north nave. Photo: Sanna Argus Tirén/Royalpalaces.se

VIDEO ABOUT THE GRAVE OF CHRIST

Watch a video about the grave of Christ (in Swedish)

The Riddarholmen Church is the final resting place of the Swedish kings, and is Stockholm's only preserved mediaeval abbey.

Find out more about the Riddarholmen Church

For large groups we recommend a pre-booked guided tour. The tours can be given in Swedish or English.

Discover more at The Riddarholmen Church

The current church has three naves but originally had two, with the south side aisle having been added in the mid-15th century.

In 1858–60 this chapel was built for the present royal dynasty of Sweden, the Bernadotte family.

With the exception of Queen Kristina, all the Swedish monarchs from King Gustav II Adolf to King Gustaf V have been laid to rest in the R...

Autumn at the royal sites

Two royal palaces are open in autumn 2021 – Gripsholm Castle and the Royal Palace. The exhibition about the popular Crown Princess Margar...

Read more
The grave of Christ

The Riddarholmen Church's newest addition is also one of the church's oldest objects: a wooden sculpture of Christ, dating from around th...

The royal burial church at Riddarholmen also houses the Coats of arms of deceased Seraphim Knights. The deceased Knight is honoured with ...