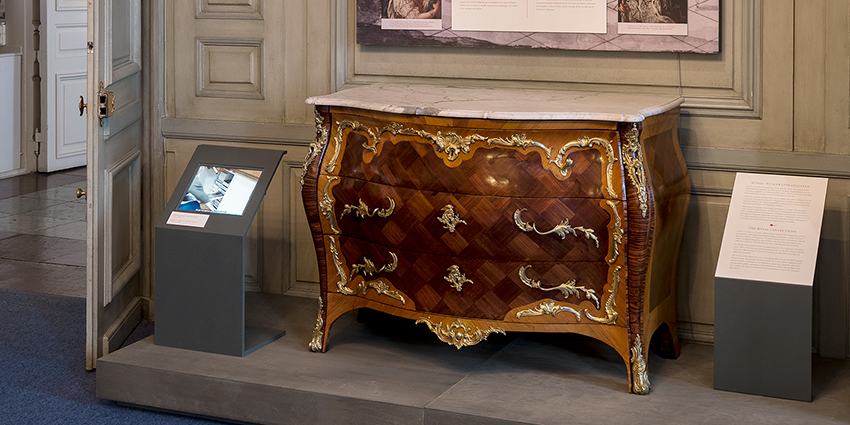 Caring for history and future

In the Royal collections there are two bureaus made by Christian Linning, one of the leading Rococo cabinetmakers in Sweden. These commodes have been in the collections since 1766, and recently been restored.

In september 1766, architect Carl Fredric Adelcrantz placed an order for a pair of commodes with the royal cabinetmaker Christian Linning. As the person responsible for interior design at the Swedish Royal court, Adelcrantz was readying palace living quarters for Prince Gustav (III) and Danish Princess Sofia Magdalena who were to be married in October that year. Built in Linning’s workshop at Köpmangatan 3, just 200 meters from the palace, these commodes have been part of the Royal collections since 1766.

Upon delivery, they were presumably placed in Princess Sofia Magdalena’s quarters in the State Apartments, before later being moved to Gripsholm Castle in the 1770s. Though royal furniture is moved and refurbished or repaired over time, the continuity of ownership ensures that all kinds of furnishings are preserved.

See the video link on this web page, where furniture
conservator Fredrik Hedgårdh shows prime examples of the use and care of the Royal Collections.

Christian Linning was one of the leading Rococo cabinetmakers in Sweden. He started as an apprentice with Christopher Wellendorph the Younger in 1730, became a journeyman in 1734 and then a master craftsman in 1746 after completing a cabinet that qualified. Linning was a skilled cabinetmaker who eventually became famous for his elegant bureaus, but his workshop also produced other furniture such as graceful writing desks and ladies’ work tables.

Linning’s work clearly shows how the Swedish aesthetic shifted from Late Baroque to Rococo. His early works are characterized by German, Dutch and English ideals, but from the 1750s the furniture was increasingly influenced by new impressions from France, where the Rococo flourished. For more than 30 years, Linning headed one of Stockholms most productive workshops at Köpmangatan 3 in the Old Town. He took over the well-equipped furniture workshop with thirteen work benches in 1747, when he, as a newly widowed man, remarried foreman Johan Hugo Fürloh’s widow Maria Christina Wulf. In 1772, Linning became alderman for cabinetmakers and served until his death. Linning was careful to sign his work as can be seen in this drawer.

These two commodes are built of pinewood with amaranth (fam. Leguminosae) veneer applied in a rhombic pattern framed by plum wood (Prunus domesticasamt) and a tracing of maple (Acer platanoides). The front posts are rosewood (Dalbergia nigra) veneer over pine.

Top mage: Christian Linnings two commodes are on show in the State Apartments at the Royal Palace. in spring 2022. Photo: Sanna Argus Tirén/Royalpalaces.se

This presentation of research and treatments by furniture
conservator Fredrik Hedgårdh allows us to trace the history of this pair of commodes. It also provides a prime example of the use and care of the Royal Collections (English subtitles). 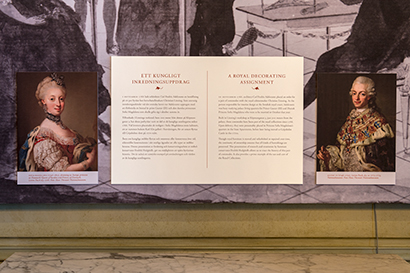 The bureaus, by Christian Linning in 1766, where made for Prince Gustav (III) and Princess Sofia Magdalena's new home at the Royal Palace of Stockholm. Photo: Sanna Argus Tirén/Royalpalaces.se

department of the Royal Collections

For hundreds of years staff have been charged with managing the use and maintenance of the royal household furnishings, for example: curtains, furniture, decorative objects, and tapestries. The Royal Collections have two primary responsibilities: serving the king in his official duties as head of state, and caring for the collections, which are owned by the State but at the disposal of the monarch. Serving the king includes suitably furnishing the palaces for ceremonies and official events. Most of the king’s representation takes place here at the Royal Palace including State visits, official banquets, Advisory Council on Foreign Affairs meetings and diplomatic receptions. The majority of the objects are in use, so managing and caring for the objects requires documentation, photography, and preventative care. It also requires employees with specialized skills, including curators, librarians, conservators, museum technicians, photographers, gilders, upholsterers and seamstresses to ensure that the objects that are owned by the State are available for future generations of monarchs, researchers and visitors.