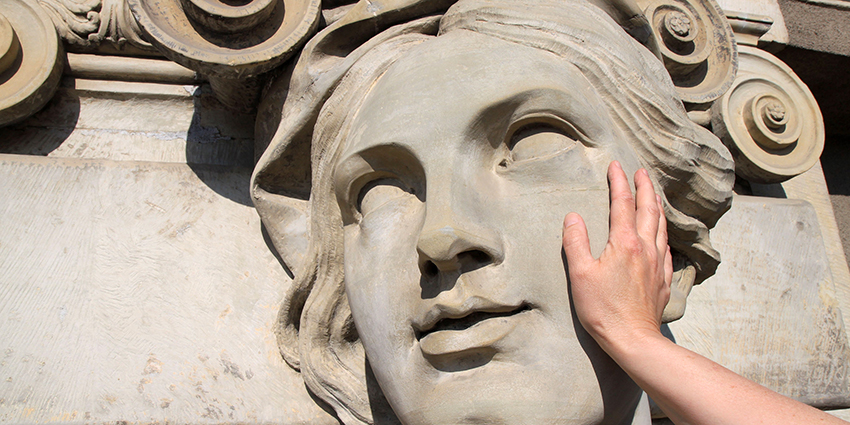 Façade renovations at the Royal Palace

The ongoing restoration of the façades at the Royal Palace is the biggest stonework project of modern times. The project began in 2011, and is currently expected to be completed in 2050.

The construction of the current palace began in the 1690s. Sweden was a great power at this time, and the palace was the centre of power. The façades of architect Nicodemus Tessin the Younger's Romanesque Baroque style palace are richly ornamented with a wealth of details in Gotland sandstone. Today, just as then, the building attracts attention and is one of the foremost landmark buildings of the European Baroque.

From maintenance to restoration

The first signs that the porous stone was crumbling were noticed as early as the late 18th century, and stones have been replaced, repaired and reinforced ever since. A baluster fell from the roof in 2005. The subsequent urgent investigation revealed that the stonework was in an even worse condition than had been feared. The façades were covered with netting to minimise the risk of injuries if more stones were to come loose.

In April 2011, the first stage of restoration began on 22 pieces of stonework. The Swedish National Property Board is responsible for the palace, and is leading the work in association with several different experts and authorities that deal with historic monuments. This is difficult and time-consuming work. Not since the palace was built has such an extensive stonework project been carried out in Sweden.

The central section of the western façade

The project has now reached stage 8, which involves working on the central section of the western façade. This is expected to be completed during 2021. The western façade is richly ornamented, including ten caryatids – each of which is five metres high – and nine medallions in relief, featuring the portraits and names of Swedish monarchs.

The restoration work involves replacing the most damaged façade stones, while others will be recarved and reinstated. As far as possible, attempts will be made to preserve sculpted details with high artistic value using advanced conservation techniques.

The palace's façade stonework is carved from Gotland sandstone. Initially, it was hoped that this sandstone could be reused except in the most climatically exposed positions, where more resistant stone is required. However, since Gotland sandstone is no longer quarried to a sufficient extent, the Swedish National Property Board has sourced suitable replacement stone from Germany, Poland and Switzerland.

Top image: Caryatid on the façade of the palace. Photo: Erik Kampmann 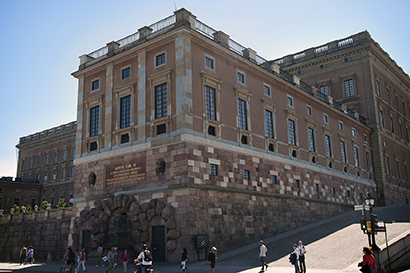 The first stage of the restoration work – the east wing of the northern façade – was completed in 2012. Work to restore the palace façades began in 2011. Photo: Erik Günther/SFV 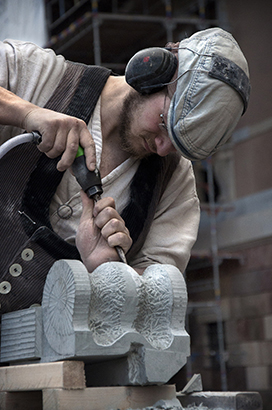 No two pieces of stone are identical, meaning that every stone has to be adjusted using hand tools and measured to fit, and some of the decorative elements need to be newly carved. Photo: Erik Günther/SFV 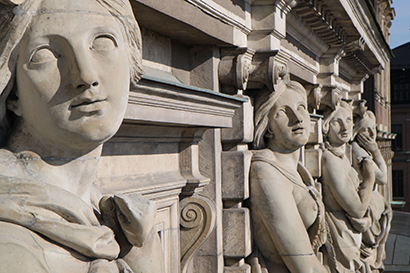 The western façade features ten caryatids – female figures which act as pillars – each of which is five metres high. The word caryatid comes from the Greek, and means 'maiden from Karyai'. Photo: Erik Kampmann 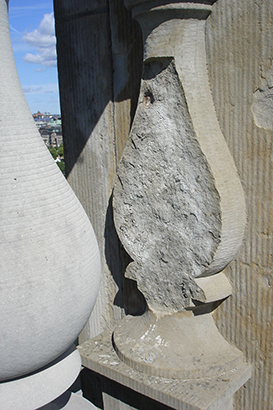 THE PALACE IN FIGURES

The great fire of 7 May 1697 destroyed much of the old palace, the Tre Kronor Palace. However, the North Wing escaped relatively unscathed. This was a new part of the palace, and had been completed just a few years previously under the direction of palace architect Nicodemus Tessin the Younger.

Six weeks after the fire, Tessin unveiled his plans for a new royal palace extending from the walls of the North Wing.

According to his plans, the new palace would be built in around six years. However, the royal family were not able to move back into the new palace until almost sixty years later, in December 1754.

Despite the drawn-out construction process, the palace was built fully in accordance with Tessin's 1697 plans.

Find out more about the history of the palace.

Come behind the scenes at the Royal Palace. This year's digital Culture Night includes a visit to the Hall of Mirrors, which is not norma...

'Look at the rugs – find me' – the popular exhibition featured the works of Märta Måås-Fjetterström is now available from home!

Revival styles, historicism and eclecticism. The 19th century was a time of many stylistic shifts. From Empire, via Revival styles and Na...

The Italian Renaissance and its Northern European counterpart differ in terms of their expressions. In many respects, the Renaissance in ...