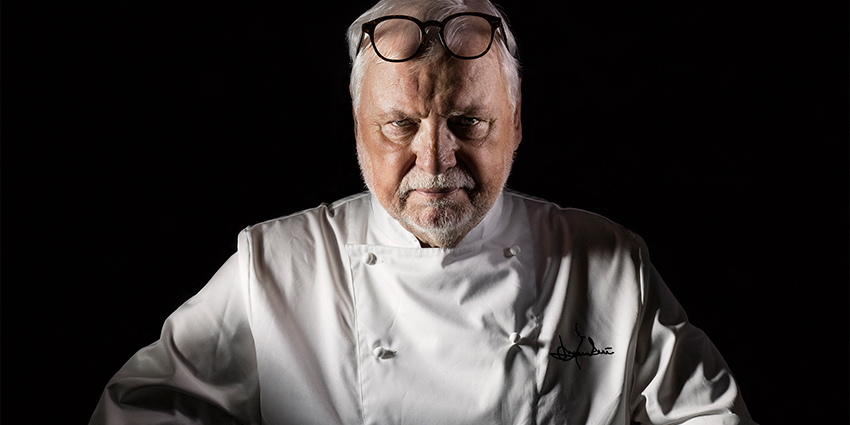 The model for this year’s Portrait of Honour is the food profile and restaurateur Leif Mannerström. The portrait was produced by the photographer Bruno Ehrs. He has captured both the model’s personality and his professional identity.

The collection is added to every year with a number of works, including the Portrait of Honour – a painting of a deserving Swedish woman or man – donated by the Gripsholm Association.

A portrait of Leif Mannerström

This year’s Portrait of Honour shows one of Sweden’s most famous restaurateurs and popular chefs – Leif Mannerström, who was born in Stockholm in 1940. He has been instrumental in putting Sweden on the gastronomic world map. That Mannerström would go the “kitchen route” was more or less obvious considering that his father was a restaurateur and his grandmother a cook who was employed for refined celebrations. At the age of 15, he started out as a stage, a chef’s apprentice, but dreamed of becoming a pilot. He didn’t succeed in his attempts be admitted to begin a career as a pilot, so chose instead to become a stage in the kitchen at the Swedish America Line M/S Kungsholm. At the age of 23, he became a record-breaking young chef at Henriksberg restaurant.

Together with the chef Crister Svantesson, in 1974 Leif Mannerström opened the restaurant Johanna. This was the very first time the new French cuisine was introduced in Sweden. Later on, he has become associated primarily with the renewal of Swedish home cooking. This has echoed in some thirty books, via the restaurant Sjömagasinet in Gothenburg plus with a renowned gastronomic profile on television. As evidence of his many successes, Mannerström has received the Kockarnas Kock – The Best of the Chefs award three times and held one star in Guide Michelin for more than a decade. He also received public recognition in 2002 when he among other distinguished Swedish food profiles ended up on a postage stamp. For many, Leif Mannerström is primarily known as one of the judges on the popular TV program Sveriges Mästerkock (based on the original British version of MasterChef).

Real home cooking is both financially and environmentally desirable; for Leif Mannerström, in this way the food has both an ethical and moral dimension.

Leif Mannerström has now reached the ripe old age of 80. Perhaps this has also contributed to his involvement in the fight for better food in hospitals and assisted living facilities, and strongly criticises what he perceived as pure carelessness, bad ingredients and lousy cooking. Real home cooking is both financially and environmentally desirable; for Leif Mannerström, in this way the food has both an ethical and moral dimension.

The portrait that Bruno Ehrs (born 1953) produced by Leif Mannerström is frugal and can even be said to be minimalist in character. Ehrs professional career as a photographer began at the Stockholm City Museum, under the tutelage of the legendary Lennart af Petersens. In tribute to Stockholm’s 750 year jubilee, he produced a number of portraits of well-known Stockholmers. For that, the surrounding urban environment played a crucial role in portraying the people who are engaged in various activities in the capital city. This time the focus is instead entirely on the food creator Leif Mannerström.

So as to avoid distracting the viewer more than what can’t be avoided, Bruno Ehrs has removed all environmental characteristics in the portrait. The model is placed in a shallow relief, an effect that the photographer achieved by directing a powerful light source from the left, only a few centimetres outside the image. In addition, so as to not create an imbalance in the lighting, Ehrs has added a low backlight to the right of the model. The contrast-rich grazing light created in this way sculpts the model, not the least the folds and buttons in the chef’s jacket. This gives associations to the old 17th century masters, which Ehrs likes to draw inspiration from. If anyone perchance does not recognise the model’s name, his name is embroidered on the jacket.

"I have chosen to load the image with temperament, for the purpose of highlighting the model’s personality. What emerges is an uncompromising food creator, who is not known for being cosy with people. He pierces us with his stern gaze," photographer Bruno Ehrs observes.

But how does one portray a professional in our time if not placing the chef in the kitchen with a large saucepan and whisk, like the classical documentary photographer August Sander? From the very beginning, the model wanted to be wearing his main characteristic – the chef’s jacket. The frying pan was Bruno Ehr’s own contribution. This important tool in the service of preparing food also creates depth in the image, but without fully taking over. In his portrait, which is the result of a fastidious aesthetic - nothing is left to chance. Therefore the glasses have ended up on the top of the model’s head, so as not to give unwelcome reflection. Even though the portrait is in colour, Ehrs almost creates the feeling of a monochrome black-and-white image by dampening the colour palette, everything to have the focus on the Swedish food wonder’s great master.

Gripsholm Castle is home to the world's oldest national portrait gallery. This is also one of the world's largest portrait galleries, and currently includes approximately 5,000 works, mostly oil paintings, of which Gripsholm houses more than 800 portraits. 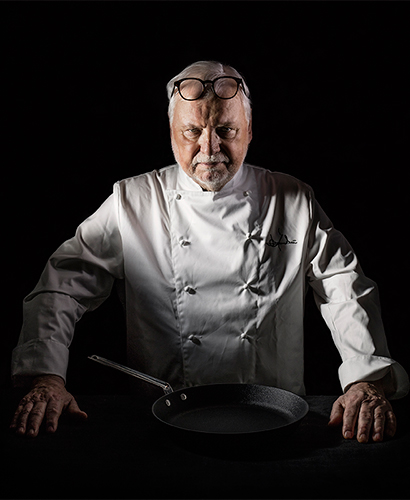 Due to the situation with the Corona pandemic, the Annual Meeting of the Gripsholm Association was cancelled 2020, which is why the portrait could not be unveiled as usual.

Advent and Christmas at the Royal sites

The Royal Palace is open daily and the exhibition about the popular Crown Princess Margareta has been extended. The guided tours at Royal...