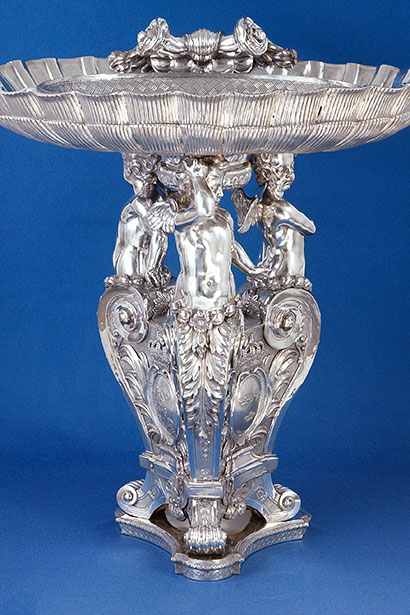 The baptismal font was intended for the new royal chapel commissioned by King Karl XI for the Tre Kronor palace during the 1690s.

Attempts were made at that time to start trading with Indonesia, but all that resulted from this was a consignment of silver from the island of Sumatra. This silver was used as the material for the baptismal font, which stands 106 centimetres high and weighs over 70 kilograms, of which 50 kilograms consists of silver.

The baptismal font was first used in 1746 for the christening of Crown Prince Gustav (III), and is still used for royal christenings to this day.

It was last used for the christening of Crown Princess Victoria and Prince Daniel's son Prince Oscar on 27 May 2016.

FACTS
Made by: French silversmith François Cousinet. Nicodemus Tessin the Younger was probably responsible for the design, in close partnership with the French sculptor Bernard Fouquet.

Material: Silver from Sumatra, which was processed at Sala Silver Mine.