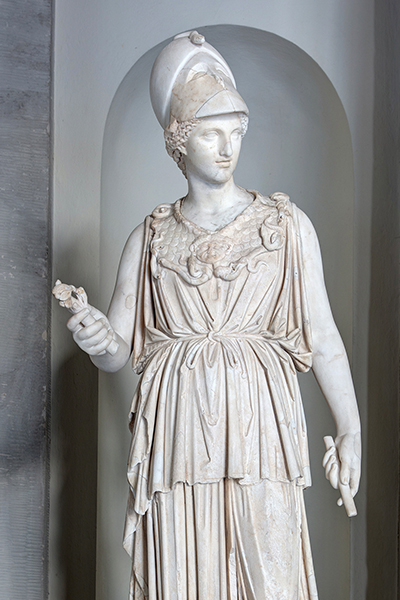 This is the mighty goddess Minerva, or, as the Greeks called her, ’Athena’. She is a Roman copy of a 2500-year-old Greek statue and she was found in 1780 on the outskirts of Rome.

You can recognise that this is Athena by her helmet, the Medusa head on her chest, and the olive branch she holds in her right hand. The helmet tells you that Athena was the goddess of war. However, the olive branch symbolises reconciliation, which earned her the byname Pacifera: the bringer of peace.

As contradictory as this might sound, Greek mythology tells us that Athena – who was also patron goddess of the city of Athens – would only enter into battles that defended the state and home from outside enemies. Besides being the goddess of war, Minerva was regarded as a goddess of medicine, patroness of arts and crafts, and above all, goddess of wisdom.

A VIRTUAL TOUR 360°
Experience the Larger Stone Gallery at the Museum of Antiquities in 360° here at the web site.

This archive shows nine of the sculptures on show at Gustav III's Museum of Antiquities, the Royal Palace. Many more are on display in the museum. Gustav III purchased several of the museum's sculptures during a journey to Italy at the end of the 1700s.