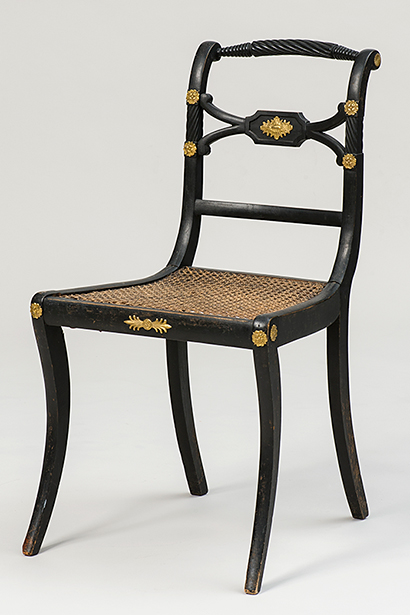 Click on the image to see the full version. Photo: Royalpalaces.se

The dining room at Rosendal Palace was furnished with chairs from Rosersberg Palace. Additional chairs were provided by the furniture merchant Wiberg, who also delivered chairs of the same type for Crown Prince Oskar and Josefina of Leuchtenberg in 1823.

Distinctive features include the way in which the upper bar of the backrest has a spiral design that mimics a ship's cord or rope. The English naval hero Lord Nelson is said to have had this type of dining chair at his London palace, and the style is therefore known as a Trafalgar chair after Nelson's most famous battle.

In England, these chairs would probably have been made from mahogany. In Sweden, they were made from alder and stained a mahogany colour or, as in this case, stained black and polished to resemble ebony.